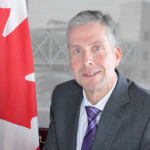 Mr. Burney graduated in 1985 from McGill University, Montreal, with a Bachelor of Arts with honours in Political Science, and in 1986 from University of Toronto, with a Master of Arts in International Relations. Mr. Burney joined the Department of Foreign Affairs and International Trade in 1987, and has held a range of positions in Ottawa and diplomatic postings overseas. Abroad, Mr. Burney served as Third and Second Secretary at the Canadian Embassy in Bangkok from 1989 to 1991, and as Consul and Senior Trade Commissioner at the Consulate General of Canada in Ho Chi Minh City, in Vietnam from 1995 to 1997.

In Ottawa, Mr. Burney was seconded as a Policy Analyst at the Foreign and Defence Policy Secretariat in the Privy Council Office from 1993 to 1995. At the Department of Foreign Affairs and International Trade, he has occupied a number of positions in the US, Asia Pacific and Trade Policy branches. He served as the Director of the Trade Controls Policy Division from 1999 to 2002, Director of the Trade Remedies Division from 2002 to 2004, Director General of the Bilateral and Regional Trade Policy Bureau from 2004 to 2006, and as Chief Trade Negotiator (Bilateral and Regional), in the Trade Policy and Negotiations Branch from 2006 to 2009. From 2009 to 2011, Mr. Burney served as Assistant Deputy Minister of the International Business Development, Investment & Innovation Branch and from 2011-2015, as Assistant Deputy Minister, Trade Policy and Negotiations. In February 2015, Mr. Burney was the recipient of the 2014 Outstanding Achievement Award (OAA) of the Public Service of Canada. The OAA is distinct from other awards as it is the Prime Minister’s Award and accords the highest expression of recognition for senior leaders in the Public Service of Canada.

In July 2015, Mr. Burney was appointed Assistant Secretary to the Cabinet in the Economic and Regional Development Policy Secretariat in the Privy Council office.