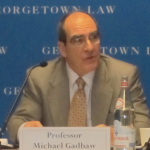 R. Michael Gadbaw’s career covers over three decades in Washington practicing international economic law, beginning as a White House intern in the summer of 1973 and continuing as a government official, then partner in private practice and eventually senior corporate legal officer. He is currently devoting his time to academic pursuits: researching, publishing and teaching a seminar on the law and policy of international economic regulation examining the regulatory systems governing trade, monetary, finance, investment and anticorruption. His latest publication is a chapter on “Competition Policy” in the latest volume on the Transpacific Partnership published by the Peterson Institute. He has also edited a collection of tributes to John H. Jackson that is forthcoming in the Journal of International Economic Law.

Gadbaw’s career included five years as a government attorney in the US Treasury and the Office of the US Trade Representative (1975-1980), an associate and partner in private practice at Verner, Liipfert, Bernhard and McPherson (1980-1985) and Dewey Ballantine (1985-1990) and as a Vice President and Senior Counsel at General Electric (1990-2008) where he had responsibilities for global government relations and policy, transactions support, compliance with the FCPA and export control regulations and policy.

He has a Juris Doctor from the University of Michigan, a B.A. from Fordham University and a Masters in international relations from the Fletcher School of Law and Diplomacy. He serves on a number of nonprofit boards, including the National Bureau of Asian Research and the European Institute.